Eskola is a village of pine forests and sandy ridges, located in the town of Kannus (12 km away) in Central Ostrobothnia, western Finland. The village history is dominated by the forest railroad, which provided jobs for hundreds, even thousands of people from the 1920's to the 1960's. The heritage of the railroad is seen everywhere in the village and especially in the villager-owned company Eskola Village Service Ltd, which has built its brand around the history and culture of the village. 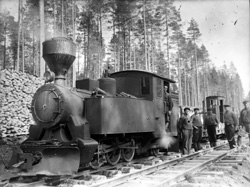 There are around 400 inhabitants in Eskola, and although it is a rural village, there is very little agriculture. There are three major industrial workplaces in Eskola: a window and door factory, a sawmill and a concrete foundry. Most of the basic services in the village are provided by Eskola Village Service Ltd: a kindergarten, a restaurant, domestic services and rental apartments. The company is owned by over 130 people, former and current villagers and other supporters. It is a social enterprise in the sense that all the profit is being used to the benefit of the village - the company does not pay dividends to its owners. Most of the previously mentioned services are found at the local service centre Eskola-talo or Eskola House, which used to be (and still is!) the local school building. At Eskola House, one can also find post services, such as the parcel package automat.

Eskola village society is the representative and the coordinator of the development of the village. Its main source of income is the Eskola summer theatre, a volunteer-based amateur theatre, that has around 3000-4000 spectators during each summer. The village society also helps to take care of the historical sites and buildings of the village and it upkeeps the forest railroad museum. It organises rehabilitative work places and summer jobs for the young. There are also other active societies in the village, such as the parents society, sports society and hunting club. The villagers are very active volunteers in many kinds of ventures. 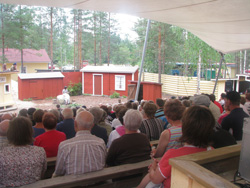 Eskola has been an example in various case-studies concerning local and inhabitant-based development. It is also one of the example villages in EU's Smart Village initiative. The village is constantly trying to develop and better itself, and to take care of itself with all the diminishing public services. If one doesn't get the services needed from the municipality of from private companies, the village provides them on its own!

Eskola was nominated National Village of the Year in 2017. The choice was a hard one, since no other village had previously been selected twice, and Eskola was already the village of the year in 2001. But, as the chairman of the Finnish Village Movement said in his speech: "They are just THAT good". The self-provided services, the school experiment, the summer theatre and the ongoing development through various projects were reason enough for the re-election.